Having just returned from a two week trip with the Blue Men of Morocco I would like to recommend this to everyone.

There were six of us who were driven around by Zaid in a very comfortable Mercedes mini bus which meant plenty of room for us and our luggage and all the bits and pieces we gathered on the way. We were meet at the airport in Casablanca and spent our first night in a great little Riad with in the Kasbah at Rabat.Our second day took us to Fez via Meknes,Volobus and Moulay Idress with a guide in each to enthral us. It is hard not to fall in love with Fez with it’s labyrinth of ancient winding streets. Maybe it was our guide Amed who we all fell in love with or the beautiful Riad Norma. Whatever, we had three days of visiting all the historical and interesting parts of Fez and learning of some of the amazing crafts Moroccans are known for pottery, mosaic, carpets, weavers,leather and the well known dying vats.

Then on and out to the desert and Haven La chance. The drive over the mid Atlas Mts. quiet spectacular. Spring had just begin and the Berber farmers had just taken their animals up into the Mts to graze. Over the otherside and a big change of scenery. It can only be called dramatic. From arid hillsides,spectacular sand dunes to lush oasis. We camped in Berber style tents (but with all the comforts needed) and were fed extremely well. Rode Camels into the sand dunes and camped one night out there and woke to see the sun rise. We were taken to Bedouin villages to hear their music and had lunch in the homes of genuine blue men. Bathed in the local Homman and were feeling very privileged to have been part of their lives if only for a short time.

Time to leave the desert and on to Ouarzazate via Todra gorge.Another outstanding Riad with views of the snow capped Atlas mts.The drive over the mountains again quiet spectacular and on into Marrakech. Elena from BMOM did it again with an absolutely exquisite Riad. Three nights here enjoying the hustle and bustle that is Marrakech. Then on to Essaouira. A picturesque fishing town and it would seem a movie set.The whole town was being transformed for a movie and we were told this was not the first. Our guide Hassan took us to an amazing market early the next morning. We were enthralled to see every form of livestock,tool,grain and even medicines, food and clothing up for grabs and it made for some really good photographs.

On up the coast to Casablanca and regretfully the end of our fabulous holiday. I can only say travelling with the Blue men is the easiest travelling I have done.Every last detail was taken care of, the Riads we stayed at were all first class. The guides and drivers could not have been more obliging, friendly and fun to be with and if you get a chance to visit this truly wonderful country make sure you go with The Blue Men of Morocco. 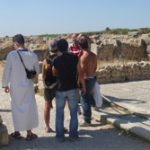 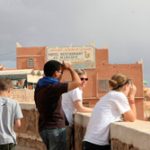